An organic cooperative supermarket has just opened next door to my appartment on Place de Catalogne.

All the food, detergents, beauty products and essential oils are certified organic. 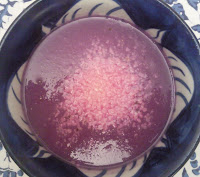 How do you feel about unusual foods?
A. I want to try it out.
B. I think it is scary.

Email ThisBlogThis!Share to TwitterShare to FacebookShare to Pinterest
Libellés : food

Moon river, wider than a mile

I have been travelling again: I was last week in Kunming, Yunnan Province of China, to facilitate the concluding workshop of the FAO project on food consumer market research, about which I have already blogged. This time, the main purpose of the workshop was to share the conclusions of the research implemented by the four national teams on the consumers of rice, tomato and pork meat.

I noticed that the participants were not that comfortable in speaking in the relatively large multinational group of 24 participants. So I decided to use a knowledge sharing method called the River of Life to depict the main lessons learned by the participants in the project. The River of Life allows people to reflect on the chronology of their own life or of their experiences during a particular project or event. It is a method that involves small group discussion and drawing. 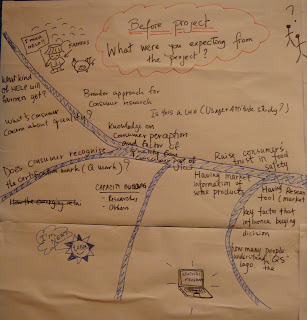 For this particular exercise, I asked all the participants to reflect on the project they had all been involved in together during the previous year. The River of Life that was depicted by the group thus symbolized the lifetime of the project and participants added to the general drawing the different events that had happened during the project. I first asked them to form groups of five or six people and discuss what they were expecting from the project before it had started. After their discussion, the participants started writing down their expectations on the big drawing board but, very quickly, drawings also started appearing.

In the second phase, I asked the workshop participants to reflect on the problems they had faced during the project, how they had solved them, and the lessons they had learned from the project. Here again, lots of drawings were added to the board with many participants trying to add their own element to the River of Life. 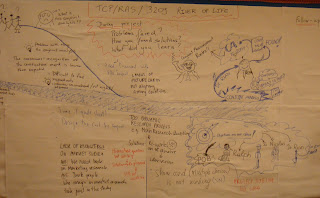 Finally, I asked everybody to think about the follow-up activities they would like to implement when the project is over. Here, we had more serious lists of future activities.

Overall, I thought the exercise was very successful as it allowed the participants who were not that talkative in the plenary group to discuss in smaller groups the issues that were important for the project as well as the lessons they had learned. Those elements were then shared with all through the large drawing of the River of Life.

I think participants were quite comfortable in drawing on the board as I had stuck the drawing of the River of Life on the wall so it was quite convenient for many to be drawing or writing at the same time on the board. Furthermore, some of the people involved had been interacting during a whole year and had participated in two previous workshops. They had become accustomed to working closely together.

The lessons I have learned: the creative part of people comes out quite easily when they have grown familiar with each other and they see the fun part of an activity. The River of Life method helps to share lessons learned from a common event when participants feel they are free to express themselves when contributing to the big picture.

This little piggy had roast beef 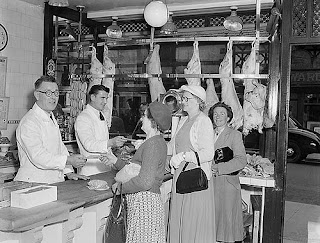 My local butcher shop just changed its owner, so with the new owner came new suppliers, and with new suppliers came new meats. I am positively delighted: this new butcher supplies most of his meat from the Southwest of France where my family comes from. So I can now find the same kind of meat I was used to eating when I visited my grandparents or my grand-aunts.

The grain-fed chicken have such a strong yellow skin you know they have been eating lots of maize. The pork is butchered not far from my home town of Mont-de-Marsan. The veal and beef come from the green hills around Brive in the Périgord region.

The beef is particularly tasty. It is called "Boeuf de Coutancie". The butcher said the cows are raised during five years in the Périgord area of France. For the last three years of their lives, they live outside in the fields most of the time, eating grass complemented by grain. They also get a daily massage! How much more can one do for animal welfare? The meat was very tender: the pan-fried steak, simply seasoned with coarse-grain salt and pepper sprinkled on top, melted in my mouth.

Staying in a serviced appartment in Paris? Try it out: the butcher shop is at the corner of Rue du Château and Rue Raymond Losserand in the 14th District of Paris.