Five years after my last staged production in 2013, I am delighted to have been able to take part in an opera production this past week. I joined the small choral ensemble for Mozart's Mariage of Figaro in a production of Opéra des Landes in the small coastal village of Soustons. It is not too far away from my parents' house so I took a week off work to rest during the day and sing every night for the festival.

We were sold out every night! The soloists were very good singing their solos and all manners of ensemble. They were particularly clever playing their part in the dynamic staging for this complicated story where everybody seems to be seducing one another. The original late 18th century plot was reset by the director as a Spanish 80s sitcom. The choir only had around seven minutes of stage time but it was still worth it to be able to listen to Mozart's wonderful music five nights in a row...

To compensate for the limited choir presence in the opera, the festival director also programmed a performance of Haydn's Creation with two combined choirs of 70 performers. All the artists including the orchestra and conductor wore white as the oratorio is sung by angels and archangels.

There were some real magical musical moments this past week in Soustons. However, I would like to highlight an instant of visual magic. When the choir was taking photos in our changing room, the second violin of the instrumental ensemble struck an impromptu pose as he passed by. The result: a photo I would call Nozze chorus with Rembrandt portrait. 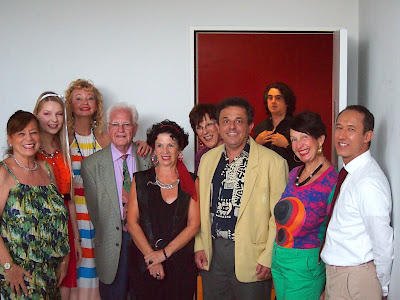